As companies leave the UK for mainland Europe, English could go the other way…

This year saw our client, Royal Schiphol Group, publish its annual report in English. It’s the first time they’ve opted for a language other than Dutch. A deliberate move as part of the Group’s ‘English-first’ strategy to enhance its international communications and collaborations.

As the most widely used language in the world with around 1.8 billion first- and second-language speakers, English plays a central role in twenty-first-century business communications.

It’s not just Dutch companies, of course. Japanese car maker Nissan made English the cornerstone of its global operations around 20 years ago, and now Honda is following suit. Samsung, Lenovo and Nokia are also committed followers of the ‘English-first’ trend.

However, with the global business community now being forced to reconsider its relationship with the United Kingdom, what role can we expect English to play in a post-Brexit landscape?

Companies currently headquartered in the UK are already making a hasty getaway. At the time of writing, the Dutch government was talking to more than 250 firms looking to relocate to the Netherlands before Brexit; this number is expected to swell in the months and years ahead.

As business moves one way, English may be forced in the opposite direction. Once the UK officially leaves the EU, there will be 5.5 million first-language English speakers left living in the region (in Ireland and Malta). That’s roughly 1% in a population of some 500 million.

While English is currently more or less unrivalled as the working language of the EU, it has actually only held this position since 1995, when Sweden, Finland and Austria (where English is widely spoken) joined the community. Prior to this, the language of diplomacy was often French.

The EU’s shifting demographic make-up may well see English come under pressure from other languages in decades to come. France, for one, should welcome the opportunity to reassert its mother tongue within European business and political life.

The potential accession of Turkey – with a population of 82 million and close cultural ties with Germany – could move the needle further still. 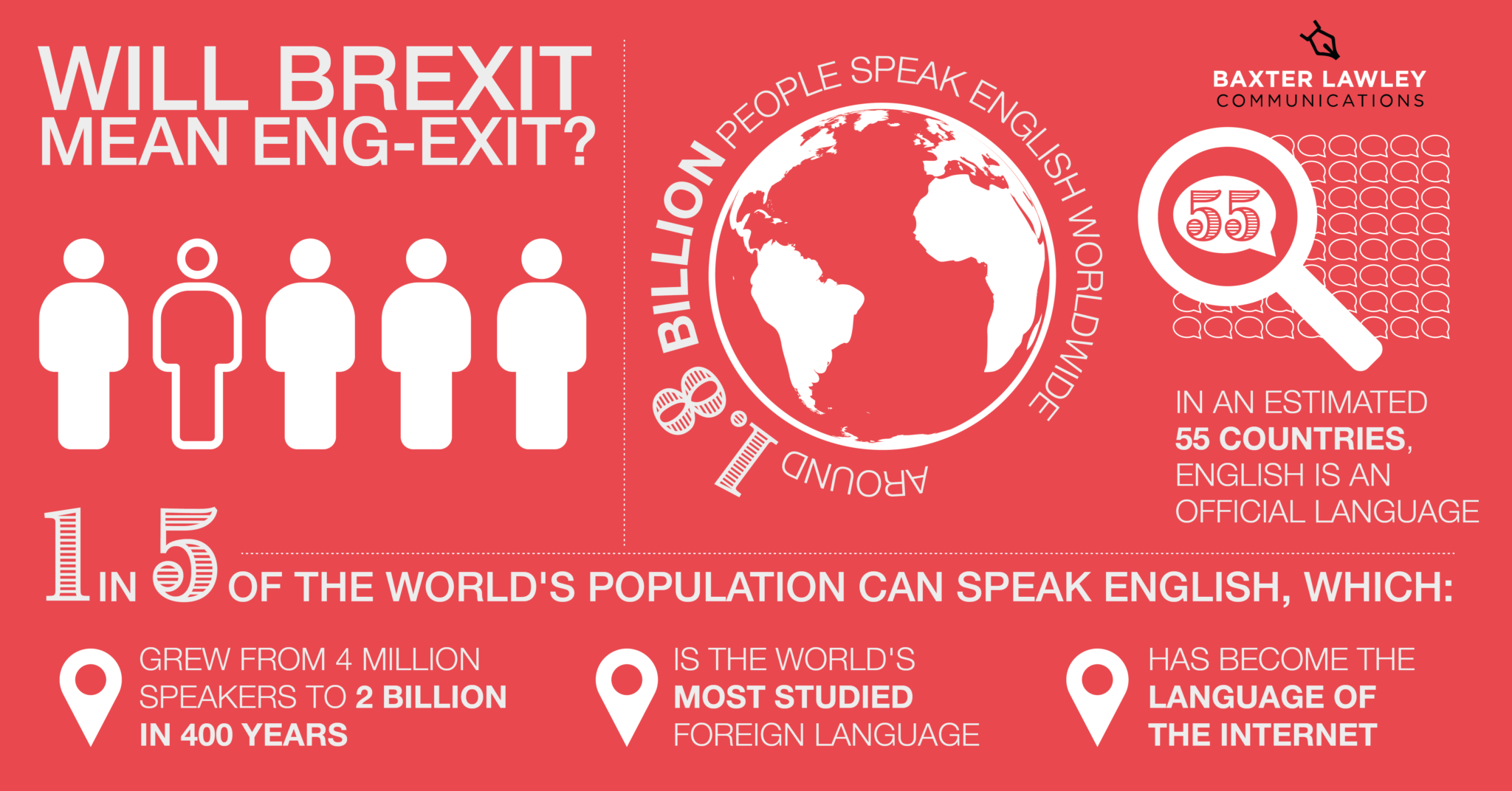 Yet, English has one clear advantage over these rival tongues: its globality. Because, unlike German or Italian – or, to a lesser extent, French – English can’t really be classed as a European language anymore. With more than a billion first- and second-language speakers worldwide, the UK represents a relatively small portion of the English-speaking world.

And English-speaking countries matter. Besides the UK, five G20 nations – Australia, Canada, India, South Africa and the United States – use English as their modus operandi.

These countries alone account for around a quarter of the world’s population and about 36% of global GDP. Nigeria (population: 199 million) and many other fast-growing developing economies add to the global headcount.

Whatever their language of preference, European companies cannot ignore the realities of today’s global marketplace. Brexit or no Brexit, English is likely to remain the lingua franca of the European and wider international business community.

As clients, staff and operating units become increasingly globally dispersed, it pays for companies to have a shared language with which to knit all of these moving parts together. And, given the arguments above, it stands to reason that that language should be English.

To sum up: the UK’s retreat from European business life may well lead to a shake-up of supply chains and sales strategies. However, it’s unlikely to knock English off its perch as the go-to language of global communications. Where Schiphol has gone, expect others to follow.

At Baxter Lawley Communications, our team of expert native-English writers can help you to clearly communicate your business ideas to a global audience, both internally and externally. Get in touch with us today to find out how we can work together to inform, express and inspire.

How to communicate internally during the crisis

It’s a tough job, but somebody’s gotta do it…

Five quick and dirty tips to improve your next press release

Above all, define your goals.

Sustainability and CSR writing and translation

Get in touch with a member of our English copywriting team today to find out how our sustainability writers can support you!